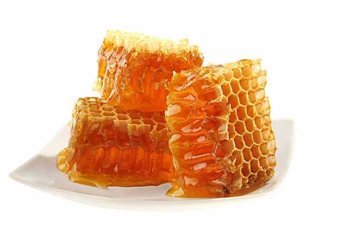 And thy Lord taught the bee to build its cells in hills, on trees and in (men's) habitations. There emerges from their bellies a drink, varying in colours, in which there is a healing for people. Verily in this is a Sign for those who give thought. [Surah an-Nahl - 68-69]

Ibn Qaiyum commented that the reason why the man wasn't cured straight after taking the honey was due to much harmful properties in the man's stomach that needed more honey for it to be removed. [Zaad al-Ma'aad - 4/35].

As for Honey... there comes forth from their bellies (bees) a drink of varying color wherein is a healing for men..."{An-Nahl 16-69}

How honey is made

There are several types of bees - bumblebees, honey bees, yellow jackets, carpenter bees, wasps, hornet, and more but in general, honey is produced by the honey bees (thus the name!).


When a honey bee visits a flower (usually located around 1 or 2 kilometers away from its hive), it obtains two things from the flower: nectar and pollen. Bees make honey from the nectar they get from the flower. Nectar is a sweet, sugary liquid secreted by flowers and it is the basic raw element that is actually used to make honey. This nectar in fact determines the components and taste of the honey. To answer the question 'How do bees make honey', this process starts when the worker bee sucks nectar from flowers using her tongue (also called proboscis) and stores it in her special pouch in her body known as the honey stomach.

When the stomach is full - usually after visiting between 50 to 150 flowers - the worker bee will return to the hive. The process of converting the nectar into honey though, can start even before she reaches the honey bee hive. How? On the way back, the bee adds a type of enzyme from her body to the nectar that she collected. What this enzyme does is breaking down the complex plant sugar in the nectar into glucose and fructose which are simpler and can be digested more easily by the bees.

This nectar is carried back to the hive, ready to be unloaded by the other worker bees (By the way,a hive contains around 40,000 bees on average). Now they are all set to proceed with the next step in honey-making: nectar transfer.

The nectar is transferred to the other worker bees through their mouths. Once the nectar is delivered, the worker bees will store it in the honeycomb cells. At this point, most of the moisture will be evaporated, which leaves approximately 18 to 20% of water in the honey and turning it into a thicker syrup. To help make the nectar dry even faster, the bees will fan it with their wings.

When we talk about honey bee hives, we are usually referring to the artificial or man-made honey bee hives that are solely intended for honey production. Natural honey bee hives are referred to as "nests"). In a hive, other enzymes are added to avoid fermentation and bacteria attack. Once this is done, the worker bees will seal the top of each cell with a thin beeswax cap. This is where the honey is stored until it is eaten. After that, they will move to the next empty comb, starting the process of making honey all over again.

Manuka Honey benefits are established and have been recognized by many people. Even medical professionals around the world highly appreciate the amazing healing benefits of Manuka Honey.

Manuka honey, or its scientific name Leotospermum Scoparium, comes from the Manuka tree that grows in the remote rain forest of New Zealand. It is a type of raw honey that has been used for centuries by the Maori people in New Zealand to cure fever and cold, heal wounds, treat infection and to get rid of tummy pain.
This type of honey is well known for its high antibiotic properties and mineral content.

Manuka Honey is effective to treat many diseases caused by bacteria or fungal infection. It is being used to fight a type of bacteria that is resistant to antibiotics, MRSA that infects surgical wounds.

Manuka Honey benefits have also been proven through clinical trials. For example, a clinical trial on using honey as a wound dressing have been conducted to compare the effects with a standard treatment. In these trials, Manuka Honey has shown positive results. In fact, the advantages of Manuka Honey are obvious even when compared with other varieties of honey.

One example is in the case of dysepsia and stomach ulcers, diseases that are caused by the infection of a species of bacteria known as helicobacter pylori in the stomach. It was found that when honey with hydrogen peroxide activity is used to treat this infection, it did not prevent the growth of this bacteria even when the concentration is added up to 50%. However, Manuka honey stopped the bacteria growth completely at a concentration level as low as 5%.

Sources of Manuka Honey are very limited because the pollenization period of the flowers of Manuka tree is very short, and besides that, production of honey also depends on the weather.

Besides its amazing health benefits, Manuka Honey is distinguished for its very unique aroma and taste. It has a very thick, creamy texture, and some describe the taste as similar to a mixture of sugar and barley. The color ranges from dark cream to dark brown This type of honey is very high in demand for its amazing healing power.

Honey has a powerful antibacterial effect due to several components:

1) Osmotic effect
A high level of water and sugar contained in honey (especially fructose) causes it to have a high osmotic effect. This effect will prevent the micro organisms in the body to spread.

2) Hydrogen peroxide
The presence of sugar and water, along with free oxygen in honey, will create gluconic acid and hydrogen peroxide. Both of these elements are beneficial to kill microorganisms inside the body.

3) Acidity
The acidity of honey is one of the factors that contribute to its antibacterial effect, antioxidant activities, and stability against microorganisms. The pH level of undiluted honey varies from 3.2 to 4.5 and this low acidity level inhibits the growth of bacterial pathogens, as some types of bacteria require a pH level of 7.2 to 7.4 to grow. Honey acidity is due to organic acids, especially gluconic acid which is a result of glucose oxidase in honey on glucose. This acid is produced when nectar is transformed into honey and it increases on storage.

Many people that have used honey for wounds experience a remarkable effect.
Applying honey on wounds is not a recent idea. In fact, this treatment has been practiced since the ancient times. The Egyptians, for instance, used a salve of honey and grease as wound dressing. It was also used by the German physicians during World War I to treat gunshot wounds. In 1946, Professor S. Smirnov from the Tomsk Medical Institute applied honey on bullet wounds in 75 cases and concluded that it stimulates the growth of tissue in wounds that take a very long time to heal.

Today, clinical studies have shown that using honey to heal wounds is highly effective, and this includes chronic ones such as diabetic ulcers and pressure ulcers that failed to heal when conventional therapy is used.

How does honey work?

Honey reacts by releasing small quantities of hydrogen peroxide and creates a moist environment through a solution that does not stick or damage the skin tissues.

The natural hydrogen peroxide in honey makes it an excellent antibacterial. In fact, the properties of honey, when compared to other antibacterial agents, show that honey is more superior in reducing inflammation and preventing the growth of microorganisms by draining out excessive fluid and secretions from the wound. This condition inhibits the growth of pathogens and protects the skin against any infection.

Honey also contains many enzymes and one of them is catalase. What this enzyme does is speed up the breakdown of hydrogen peroxide and changes it into oxygen and water. Oxygen accelerates the healing process by stopping the growth of bacteria in the affected area.

An important reason why applying honey on wounds works so well is due to the high concentration of sugars contained in it, which prevents bacterial growth. Plus, by keeping it closed, clean and sterile, honey helps the wound to heal faster.

The effectiveness of using honey for wounds was demonstrated in one Israeli study in which health care workers applied unprocessed honey to open wounds of infants that did not heal despite the use of conventional treatment. After 5 days, they found that all infants showed great progress and 3 weeks later, the wounds had healed.

Using honey to heal wounds can be done by applying a small amount of raw honey over the affected area and covering it with a gauze or bandage. The gauze does not stick to the flesh though, because honey stimulates a flow of lubricating healing fluid.

Recently, honey wound dressings or wound plaster have been produced, which I think is a great, practical honey based product invented in the field of medicine. Not only are these honey impregnated gauzes effective and easy to use, they also reduced the pain sensation when compared to paraffin and saline-soaked gauzes.

Honey is a natural source of energy that also offers a unique combination of nutritional benefits. Sugars are the fundamental unit of energy for our bodies. All carbohydrates, whether simple sugars or complex carbohydrates, must be broken down to glucose, or blood sugar, before our bodies can use them as energy. The sugars in honey are primarily glucose and fructose and although the body absorbs them in different manners, both provide the body with quick energy. Recent studies suggest that this unique mixture of sugars which occurs naturally in honey, works best in preventing fatigue and enhancing athletic performance.

Diabetics and hypoglycemics should be careful when consuming honey and its by-products. The blood sugar reacts to these substances as it would to refined sugars. However, tupelo honey contains more levulose than any other honey and is absorbed at a slower rate so many hypoglycemics can use this type sparingly. (Prescription for Natural Healing, Balch, J. M.D., and Balch,P.A., C.N.C.)